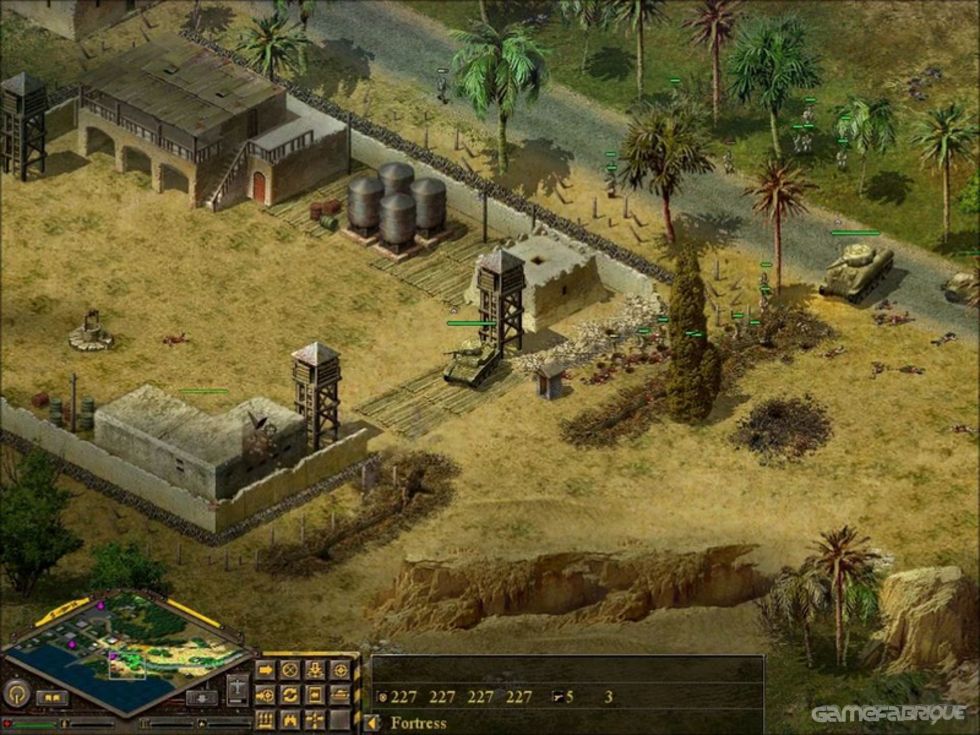 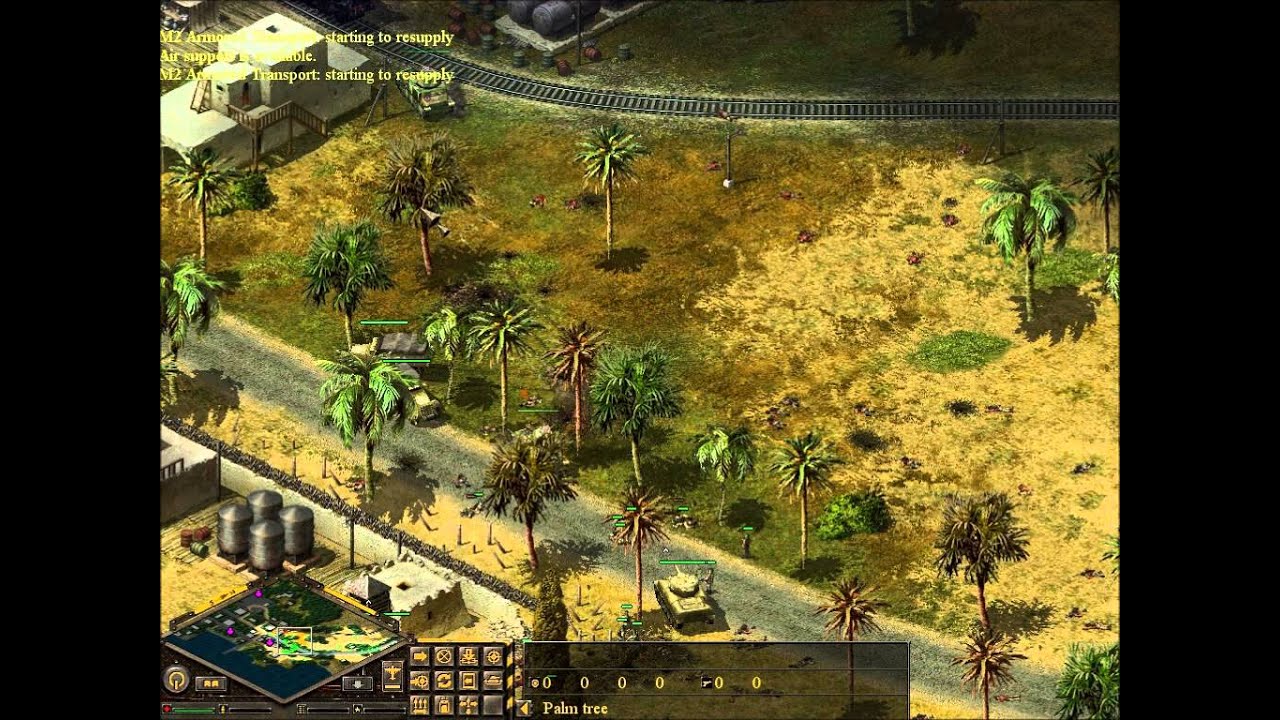 Blitzkrieg presents the battlefields of WWII and allows players to control Allied, Nazi, or Soviet troops. Over 200 units -- trains, planes, tanks, artillery, and infantry -- and 250 buildings are available. Damage, unit availability, movement, accuracy, and construction are based on historical records. Gameplay follows simulation guidelines whenever possible, though tedious maneuvers have been eliminated.

Three campaigns include environments like the Ukraine and Africa. Players have the option of completing side-missions, which grant promotions, more troops, and better equipment, or avoiding side-missions for a greater challenge. A campaign editor allows players to construct customized missions, and multiplayer options include Capture the Flag, Deathmatch, and Supremacy-style games.

World War II was surely hell for those who lived through it, but sixty years later, it's become the setting for some of today's most outstanding games. You could stick out your hand in a software store while blindfolded and still have a good chance of coming up with a great WWII wargame, first-person shooter, or flight sim.

However, if you're a fan of traditional real-time strategy games, you'd better take off that blindfold and start digging because you're unlikely to find a great WWII RTS. So far, games like the Sudden Strike series, or the recent World War II: Panzer Claws, have turned out mediocre or simply forgettable. Nival Interactive has taken a shot at the genre with their new game, Blitzkrieg, but once again, gamers end up with a WWII RTS that misses the mark, offering merely decent gameplay. 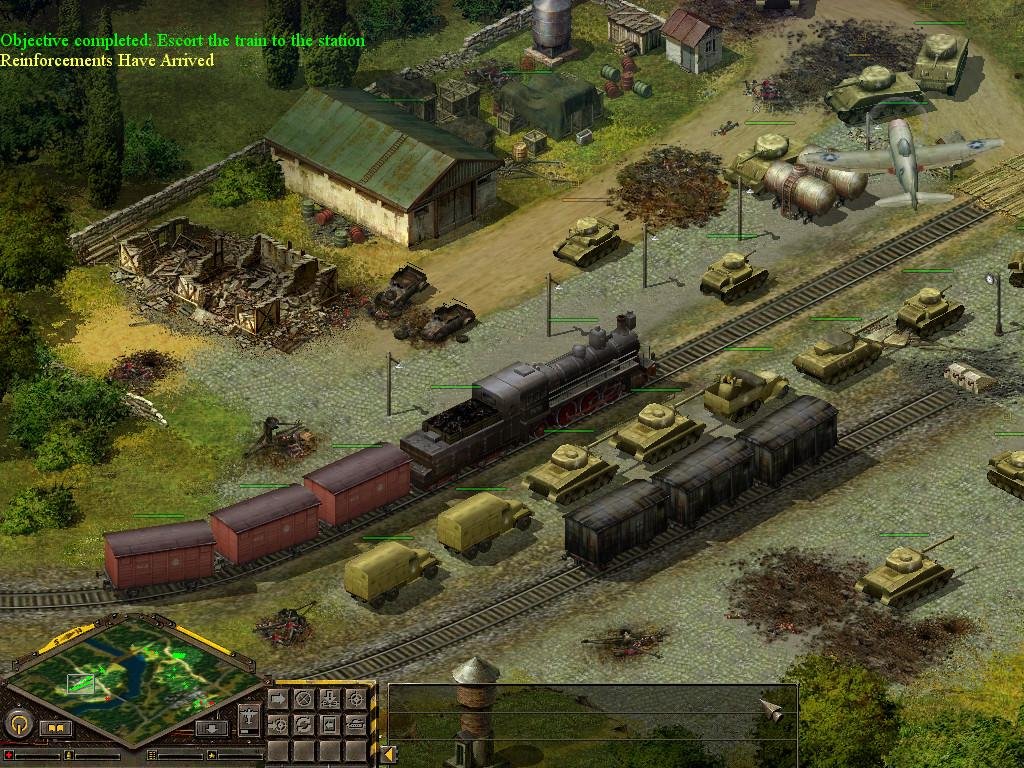 Blitzkrieg lets you play through three campaigns, one each for the Western Allies, Germans, and Soviets. The campaigns roughly follow the course of the real war, letting you fight in Norway and northern Africa, France, and Finland. That diversity is nice, but there are only three non-campaign missions, and the multiplayer offerings are uninspiring and seem prone to lag. There's no skirmish mode, either, only random missions within the campaigns or games on maps you have to create yourself in a separate editor.

On the bright side, Blitzkrieg jettisons tedious resource harvesting and base-building, instead focusing on combined-arms tactics, where you coordinate infantry, vehicles, artillery, and air power. While you don't have to worry about harvesting and building, logistics are certainly an issue, and the player who handles supplies and repair most efficiently will likely come out on top. That's no easy task, though, since your units are rather dumb and need to be micromanaged to get the job done -- one of the game's biggest failings. At least Blitzkrieg lets you pause the game to issue orders and reduce the speed to better keep track of your hapless units.

While units aren't too bright, they're well detailed. The game features over two hundred World War II tanks, airplanes, and other units inspired by real-world counterparts. Developer Nival deserves credit for doing its homework and giving units statistics that make sense in game terms while also drawing (at least roughly) on historical fact. For example, each tank is rated for front, rear, side, and top armor values, and its shells are rated for armor penetration capability and damage. Ammunition for both the main gun and the machineguns are tracked separately. The damage a tank can sustain is based on a simple hit-points model like you'd find in any RTS, but the overall focus on plausible and detailed (but never overwhelming) unit statistics is a point in Blitzkrieg's favor.

What are even more interesting are the varied unit abilities and limitations. A Soviet rocket-launcher truck can fire just a single massive salvo before running out of ammo and requiring resupply. Anti-tank guns gain an advantage when firing down from hilltops. Tanks can 'dig in' by erecting rows of sandbags to help protect their fronts. Scouts with binoculars can act as forward observers for artillery, and the latter can also choose to fire smoke shells to conceal unit movements. Combat engineers can clear mines, erect anti-tank obstacles, and more. A tank can shred infantry, but if it makes the mistake of getting too close to enemy troops, an enterprising grunt can blow the tank's tread off with a grenade, immobilizing the vehicle.

Blitzkrieg's presentation is attractive, even if the gameplay doesn't overwhelm. Combat footage from actual newsreels helps set the stage between missions. Menus and control panels are clear and attractive. The game uses traditional isometric 2D terrain, and you can't rotate, zoom, or tilt the camera. That seems odd in this day and age, but it generally works well enough (though trying to spot tiny individual troops can be hard).

Either way, the unit visuals seem to have been crafted with care. Even if some of the details are wrong, most vehicle types are clearly recognizable at a glance if you know your WWII military equipment. They're nicely animated, too. Tanks and self-propelled guns kick up dust, belch black exhaust, and leave tread marks in the turf when they travel off road. The terrain is as colorful as the units, with authentic-looking buildings, rickety wooden fences, long hedges, varied trees, intricate bridges, and meandering rivers. The pretty scenery doesn't usually last long, though, as artillery shells blast craters in the earth and set buildings on fire. In fact, the combat effects are fun to watch in their own right, with all sorts of vivid explosions.

Game 149: may 5 2017 the initials game on. Blitzkrieg's audio isn't nearly as well-crafted as its visuals, but it gets the job done. The soundtrack, with its martial percussion and menacing brass fanfares, suits the setting. Combat effects sound decent enough, though none make any great impression. Units speak in the appropriate languages, though the American and English accents can sound phony or get mixed up. (The voice actors are apparently all Russian.) Many of the lines are poorly delivered, and more than a few of them sound corny or downright silly. If you click on an American Sherman tank, its crew might respond, 'You're scratching the armor!'

Blitzkrieg could have used more polishing elsewhere, too. Many missions are poorly balanced, stacking the odds too heavily against you, and unit pathfinding problems, bugs, and occasional crashes can annoy as well. Blitzkrieg can sometimes be entertaining in spite of these problems, but it's not the great WWII RTS we've been waiting for.