###2) Open up the rar and place all the contents of the 114dgame into your folder where your game.exe is located

###3) Victory! Your diablo 2 should now run with D2BS and should look like this

Δ Diablo II mod: CMod (aka Lord of the Rings -- because it's fun to collect rare rings)

(take note: in vanilla/non-modded Diablo II, the items with the most MF [Magic Find] gain is Wealth, Cow King complete set, M'avina's complete set, and the Gull dagger -- all of which give +100% MF each. source: http://fabd.github.io/diablo2/wiki/itemswith.html#mag%)
Installation instructions:
Now when you want to start Diablo II with this mod double-left-click this shortcut and it'll run Diablo II with the mod! All other ways you ran Diablo II will run Diablo II like normal without this mod because by default Diablo II does not process the C:Program Files (x86)Diablo IIdata Folder unless 'Diablo II.exe' is executed with the -direct -txt command-line options. You will know you're playing this mod when you go to Charsi and some items will have much higher numbers than vanilla/normal's Diablo 2 to certain magic attributes (like +5 Light Radius than +1 Light Radius). (Be sure to use this shortcut for SINGLE PLAYER ONLY..do not try to enter battle.net with it.I really do not know what happens when you try to xd) 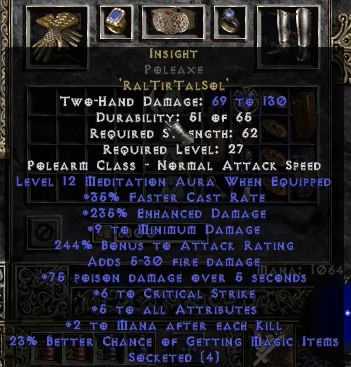 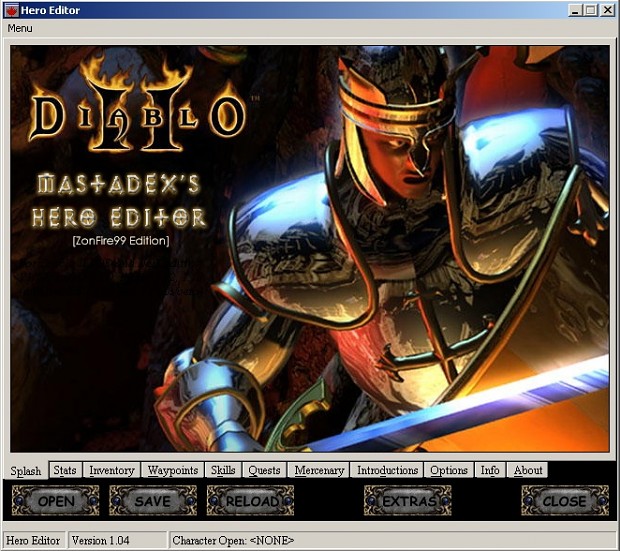 on Windows 8.0. Diablo II.exe creates these bin files with the -txt command-line option that you executed through your CMod shortcut to Diablo II.exe. The reason there are more bin files than the 7 txt files that CMod originally came with is because Diablo II.exe pre-compiles (ie. make them faster to read for itself due to the smaller filesize) all of the txt files that are in its MPQ files (basically Blizzard's compression file format and filetype: https://en.wikipedia.org/wiki/MPQ) in-memory, and Diablo II.exe sees your -txt flag passed through your Diablo II.exe CMod shortcut and immediately says: 'You need the txts in the data/ folder in Diablo II's installation root directory (ie. on Windows 10 is exclusively at C:Program Files (x86)Diablo II and in Windows 8.0 you can replace stuff in that [ie. C:Program Files (x86)Diablo II] with the stuff in 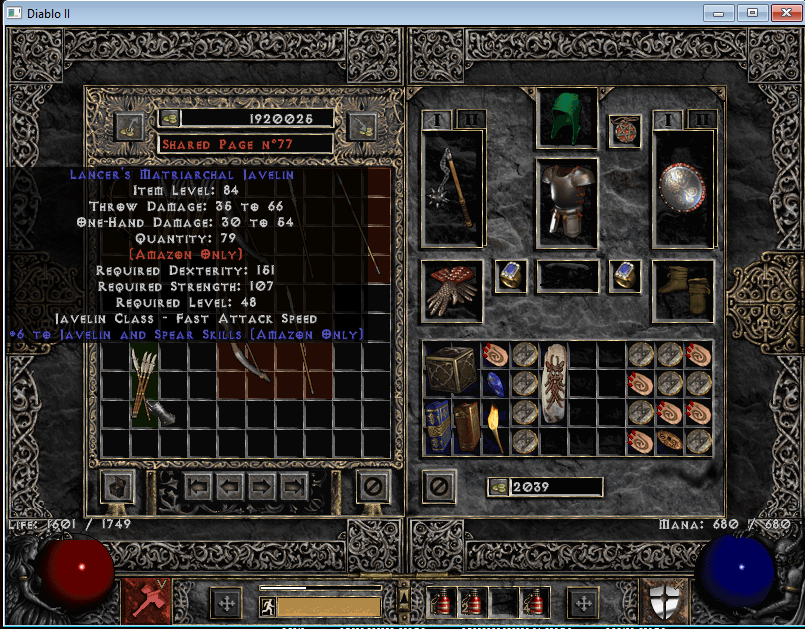 C:UsersyourWin8UsernameAppDataLocalVirtualStoreProgram Files (x86)Diablo II) to be converted from txt to bin so that it can be read by Diablo II with your -direct option. So I'm just gonna dump all of the MPQ txts in the global MPQ collection at address /data/global/excel/' and walla! There you have .bin files in those directories I described above. I'm 39% sure they should never be a problem. In my mod 90% of those .bin generated files are actually originals generated from the vanilla game configuration/engine/settings/internal-data extracted from its MPQ files (primarily d2data.mpq, d2exp.mpq, & Patch_D2.mpq, I'm 20% sure). 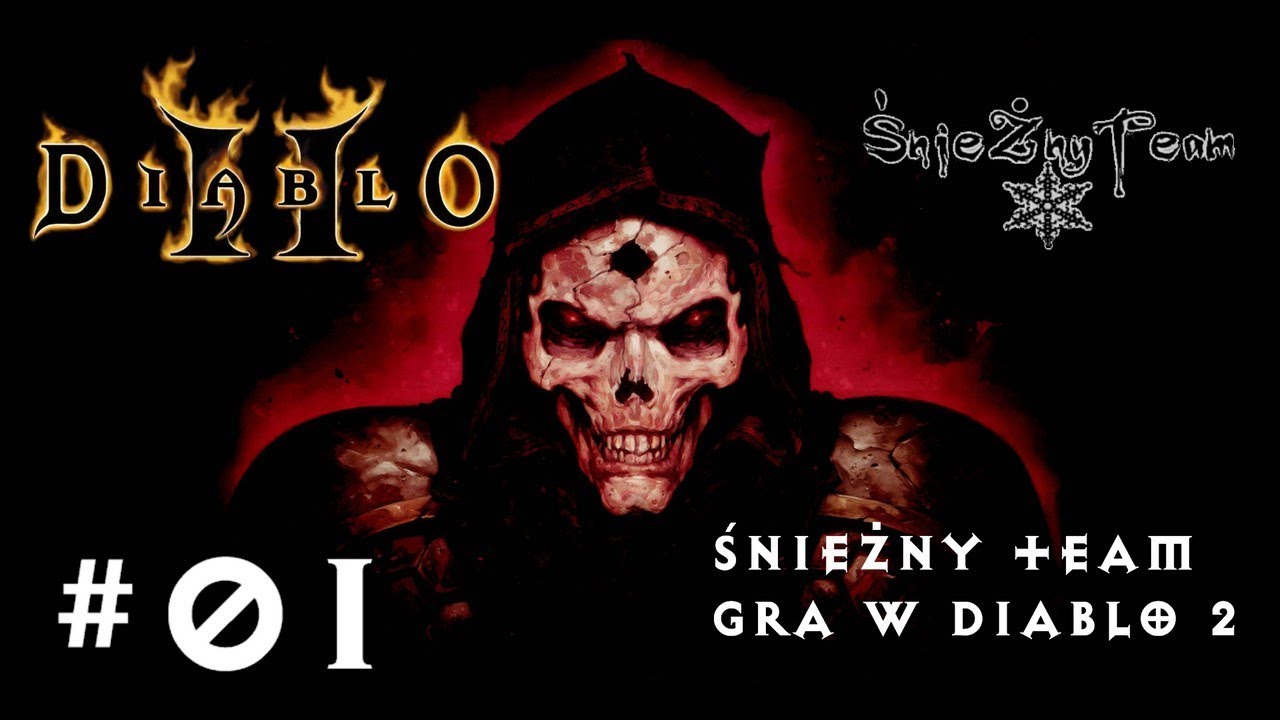 Patch 1.13c (23rd of March, 2010): Special bosses for the top 3% players.
4 major gameplay bugs fixed (duping, tppking, remote player disconnect,unintended aura stacking)
20+ other things have changed. However here are the highlights:
- game music doesn't stop when the Diablo II.exe window gains/loses focus.
- Barb's leap would lock if hit just before leaping.
- Den of Evil quest now gives Respecialization capabilities: that is, you get all of your stat/skill points back to completely redistribute!
- when Diablo II.exe is in windowed mode the window can now be maximized -- stretched.
- gold bank limit not bound by level.
- hardcore character creation has no requirements. It used to be that you had to defeat Normal difficulty with another character on your system to create a hardcore character (I'm 19-47% sure).
- Oblivion Knight's Iron Maiden curse, which was prominent in Act 4 normal if you're at all any type of melee strategist at any level, has been removed.
- added (?) -nosound Diablo II.exe option
- WW on Barb mana cost cut in half. Masteries with Barb critical strike increased by 10%. Werebear for druid's health increased by 25%, & 12 other skills (these being virtually meaningless) were changed aross Assassin, Paladin, Druid, Necro, & Sorc.

Patch 1.10 (28th of October, 2003) implemented Synergy bonuses.
Implemented the World Event (which is virtually reserved for the top 2% best players on Battle.net)

Refer to Blizzard Entertainment's Patch.txt (Diablo II'sChangeLog/Revision-History/Patch-Change-Information) that gets installed whenyou install Diablo II on your computer and update Diablo II with the latestpatch (in this case, 1.14d). This Patch.txt is located and called:
C:Program Files (x86)Diablo IIPatch.txt

will have much higher numbers than vanilla/normal's Diablo 2:OK so 90% of the time there will be at least one magical item in Charsi's shop items that has attributes that are much (like x5+) more than in normal/vanilla Diablo 2. If Charsi doesn't, then go into the Blood Moor for 1 second and come back to Charsi and relook at what she has. Here are some screenshots that I took installing this mod with the current CMod.zip and given installation instructions with a fresh/pure/legit level 1:

I did these in Windowed mode (instead of fullscreen-mode). To enable that mode, in your Diablo II.exe shortcut on your Desktop:

Put ' -w' in front of the text in the Target: textfield of your Diablo II.exe Shortcut so that it says something like: 'C:Program Files (x86)Diablo IIDiablo II.exe' -direct -txt -w