At the main menu, hold L1 + R1 and press Square, Up, Down, Circle to unlock all chapters at the chapter selection screen.

Successfully complete the game to unlock Jet Li's Once Upon A Time In China and Fist Of Legend costumes.

Hold the Left Analog-stick in any direction after you finish a combo. Jet Li will strike a pose and your bar will increase.

At the beginning of the third stage where you have to use guns, do not use the special diving until you get to a truck where there are a lot of barrels up ahead. There is a pile of dirt behind the truck. Run to the top of the dirt and bust up the special diving move. You will see Jet Li perform a high diving move.

Go slightly into the level. Eventually you will end up behind two of the security guards standing next to each other. Before killing them, sneak up behind them and listen. The one on the left will be talking about his son, and how he wants the Jet Li Rise To Honor game. Note: In order to kill the two guards, you must throw the trash can at the one on the left, then quickly chop the other so that he will not call for back-up.

There are going to be three stages during the final Boss battle. During the first stage, counter every move that he makes and eventually you will defeat him. In the second stage, you must go up to him. This is easiest when he is turned around. Then, press R1 + Left Analog-stick Forward to grab his gas mask. Eventually he will give up. In the third and final stage you must first counter him and knock him down. Then, before he gets up, keep attacking him using L1 as much as possible, before he has a chance to stand up and block your moves. You must keep fighting before he stands to block you. Try to trap him in the far right corner of the balcony, as this is slightly easier.

Some of the guards in the hospital rooms can be big and strong, yet quick and fast. The easiest way to take them out is to do a counter (R1 +L1 + Right Analog-stick) immediately followed buy dunking their head in the sink via Grab.

Jet Li: Rise to Honor is a video game released in 2004 for the PlayStation 2. The game features the likeness, voice acting and motion capture work of martial arts actor Jet Li, and features martial arts choreography by Corey Yuen.[1] 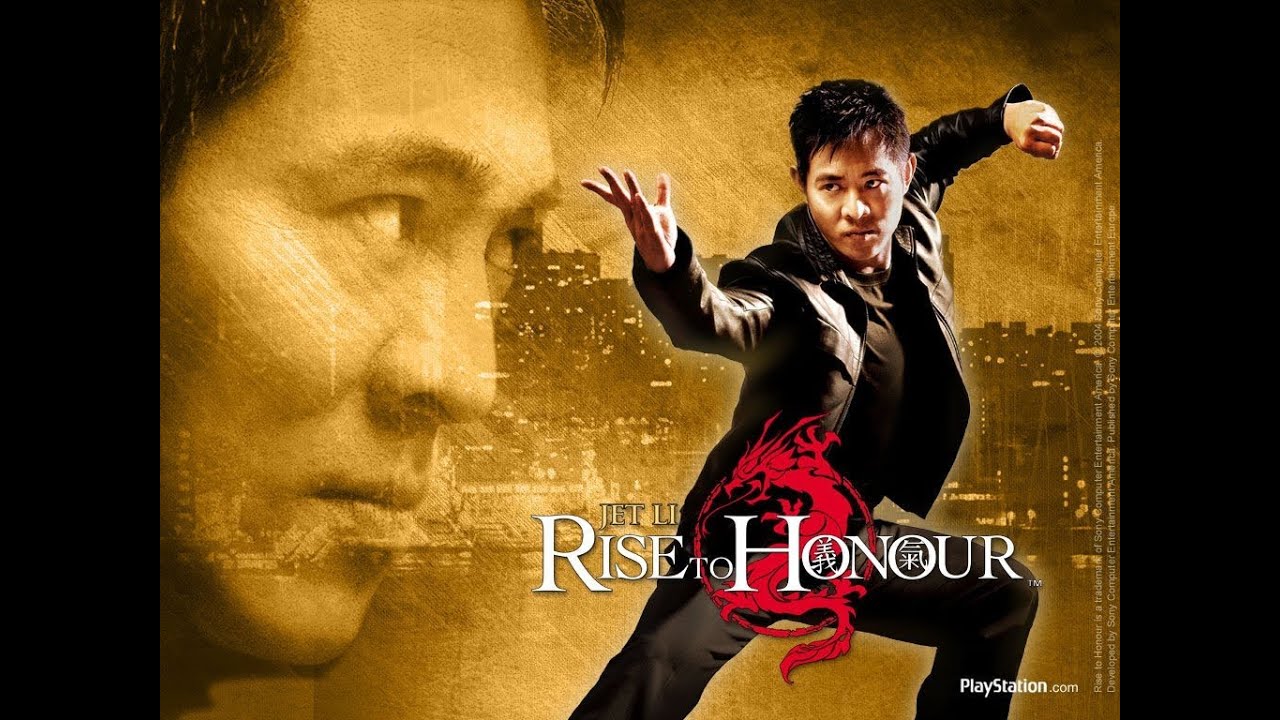 Rise to Honor features a cinematic presentation designed to mimic an action film, with no loading screens and sections of the game split up into 'scenes'. A DVD-like chapter selection menu allows the player to go back to any past scenes once they have been cleared previously.

Played from a third-person perspective, the majority of the game is a beat 'em up, with the player using the right analog stick to direct blows at enemies. The game also features a number of levels where the player uses firearms with unlimited ammunition. During levels, the player constantly builds up a store of adrenaline, which the player can unleash to perform powerful hand-to-hand combat strikes. An alternative is, when using firearms, the player initiates a temporary bullet time mode similar to the video game Max Payne. During the firearm scenes, the player can hide behind various objects such as garbage cans or walls.

The game follows Kit Yun (Jet Li), an undercover Hong Kong police officer who is assigned as a bodyguard to Boss Chiang, a friend of Kit's father. A year into Kit's undercover assignment, Boss Chiang decides to leave the life of organized crime, but not without getting outraged protests by Kwan, one of his associates, only to have various gang members attempt the assassination of Boss Chiang. Despite Kit's efforts, Boss Chiang gets assassinated by a mysterious sniper.

During Chiang's dying moments, he tells Kit to deliver an envelope containing information about the crime syndicate to his estranged daughter, Michelle. Being a childhood friend of Michelle's, Kit obliges and heads for San Francisco to deliver the message to her, despite whatever obstacles come in his way.

In San Francisco, Kit meets up with Chi, friend of Kit and Michelle's. While being pursued by thugs led by local gang boss Billy Soon, Kit and Chi successfully manage to regroup with Michelle only to end up being held captive by Billy. Kit eventually learns that Kwan hired Billy to find the envelope and that Billy is ordered to execute the three of them. Kit and Chi manage to escape captivity, defeat Billy, and free Michelle. After a melee fight, a defeated Billy attempts to shoot Michelle with his handgun, only for Chi to use his body as a human shield, which enrages Kit to kill him. Shortly after Chi succumbs to his gunshot wound, Michelle is resolved to return to Hong Kong and put an end to Kwan's activities.

Shortly after returning to Hong Kong, Michelle gets wounded by a Korean sniper Won Jang in the Cheng Chau harbor, while Kit pursues and kills Jang. Shortly after transporting Michelle to a local hospital, Michelle gets kidnapped by Kwan's henchmen, while Kit attempts to pursue her. Kit's pursuit leads him to a skyscraper building previously owned by Boss Chiang, where he fights and shoots his way through scores of Kwan's henchmen. Kit eventually defeats Kwan in hand-to-hand combat, but during an attempt to arrest Kwan, Kwan attempts to shoot Kit's superior officer, Victor Lau, only for Kit to disarm him and Victor firing fatal shots to Kwan's chest.

While holding a private funeral for Boss Chiang, Victor approaches the pair, demanding the pair to burn down the documents. Victor then reveals that he was responsible for the deaths of Chiang and Kit's father, as well as profiteering from the crime syndicate. Shortly after having burned down an envelope, Kit reveals a wire containing Victor's confession and promptly beats Victor in hand-to-hand combat. Victor is taken into H.K.P.D. Sasha fergisonamerican meadow's equestrian center. custody while Kit and Michelle have a brief discussion about Victor living and their fathers being dead, just as Kit reveals to Michelle that he had secretly hid Chiang's real envelope elsewhere safe without anyone else knowing and replaced with the fake envelope which was burned recently to confirm Victor's suspicions. Once Kit gave the Chiang's real envelope to Michelle, Kit concludes the discussion saying 'It is better to die with honor than to live without.'

Being a Jet Li video game, the game features several references to Li's previous movies. Some examples include:

Playboy gave the game a score of 88% and said, 'This isn't a game you replay ad infinitum; it's a story you experience. When you finish, you may stick it on the shelf and never touch it again, like a good book. But that doesn't mean it's not a fun read.'[15]Entertainment Weekly gave it a B and stated that 'Each level features a remarkable cinematic flair and big-budget stunts, but the game's ill-conceived control scheme can be frustrating.'[14] However, The Cincinnati Enquirer gave it three-and-a-half stars out of five and said that 'Controlling [Kit] Yun is actually quite intuitive, even with the sophisticated multidirectional fighting scheme.'[13]